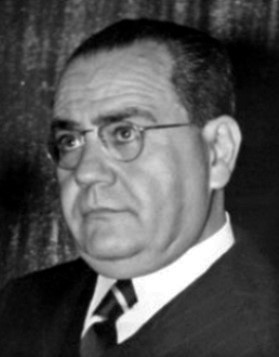 Juan Negrín y López (; 3 February 1892 – 12 November 1956) was a Spanish politician and physician. He was a leader of the Spanish Socialist Workers' Party (PSOE) and served as finance minister. He was President of the Council of Ministers of the Second Spanish Republic several times between 1937 and 1945, already in exile. He was the last Loyalist premier of Spain (1937–1939), and presided over the defeat of the Republican forces by the rebel faction under General Francisco Franco during the Spanish Civil War. He died in exile in Paris, France.

None of the leaders of the Second Spanish Republic has been as vilified as Negrín, not only by Francoist historians, but also by important sectors of the exiled Spanish Left, including the leadership of his own Socialist Party and as his friend-turned-nemesis Indalecio Prieto. He has been depicted as the principal responsible for losing the civil war, and has been charged with a dictatorial leadership style, selling Spain out to the Communists and robbing the Spanish treasury. According to the historian Stanley G. Payne, after the end of the civil war there was no person more hated than Negrín. The PSOE expelled Negrín in 1946, but he was posthumously rehabilitated in 2008. Provided by Wikipedia
Showing 1 - 1 results of 1 for search 'Negrin , Juan', query time: 0.02s Refine Results
1